Suppose you could make busy bees work just a bit harder to pollinate your fruit crops?

APIS BLOOM does just that.

This groundbreaking tool developed by ISCA Technologies for fruit and nut growers uses a naturally occurring pheromone to increase the activity of honey bees, inducing them to pollinate more flowers and preferentially in areas where the product is applied.

Its timely application at the start of flowering results in more and higher quality pollination events, increasing the potential for significantly higher crop yields.

APIS BLOOM is applied directly to the crops in the vicinity of the flowers. It then steadily releases a pheromone called Nasonov. This is the same compound that worker bees release in nature to tell other bees they have discovered productive sources of pollen and nectar and it also guides bees back to their hives.

The benefits of strategic APIS BLOOM applications include:

This resulted in an average increase of 175 pounds of raspberries per acre – creating a value far higher than the APIS BLOOM investment.

Bees normally travel as far as two miles in their search for pollen, though they are capable of going twice that far. So, applying APIS BLOOM is a clever way to make busy bees even more efficient at pollinating fruit and nut crops at a time commercial beehive rental cost are skyrocketing.

Increasing pollination costs have hit hard almond growers in California, in particular. Beehive rental fees have quadrupled in the past 15 years, with the average cost of renting a single hive during the almond blooming season reaching $188.53 in 2016. In 2001, the average cost was just $45.01, according to data from the California State Beekeepers Association.

These higher rental costs are in response to higher cost for beekeepers as they wrestle with the invasive Varroa mite, a bee parasite, that has infested more than 40 percent of commercial hives in the United States.

Beekeepers also still wrestle with colony collapse disorder – the yet-to-be-fully-explained phenomenon of worker bees failing to return home, leaving the queen and the developing larvae without enough resources for the colony to survive.

These challenges have resulted in losses of about 30 percent of commercial bee colonies a year — about twice the expected rate — mostly during the vulnerable winter months, according to an analysis by the University of California.

These challenges, however, do not mean the end of bees or the delicious produce that depends on them.

Beekeepers have responded by more frequently dividing their colonies to create new ones. Still, the overall number of hives has declined as commercial bees have become more costly and difficult to raise and maintain. The result has been fewer hives available to be trucked from grove to grove, and thus much higher pollination costs for growers.

APIS BLOOM is an economical way to increase bee pollination rates for bigger yields at a time when renting hives is becoming increasingly more expensive.

ISCA Technologies is a biotech company based in Riverside, California, that develops, tests, and commercializes safe, economical, and environmentally friendly integrated management solutions to crop-destroying and disease-spreading pests worldwide by exploiting pheromones and naturally-occurring compounds that influence animal behavior. 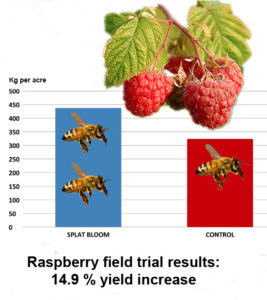